Demonstrates how force is related to the acceleration of the mass to which it is applied. The Atwood Machine allows the net force on a fixed mass to be varied in order to see the effect on velocity and acceleration of that mass. Students will first calculate the theoretical acceleration of a system using given weights and Newton's 2nd Law. They then verify that result by setting the masses into motion and measuring distance and time to allow an alternative calculation of acceleration using kinematic formulas. 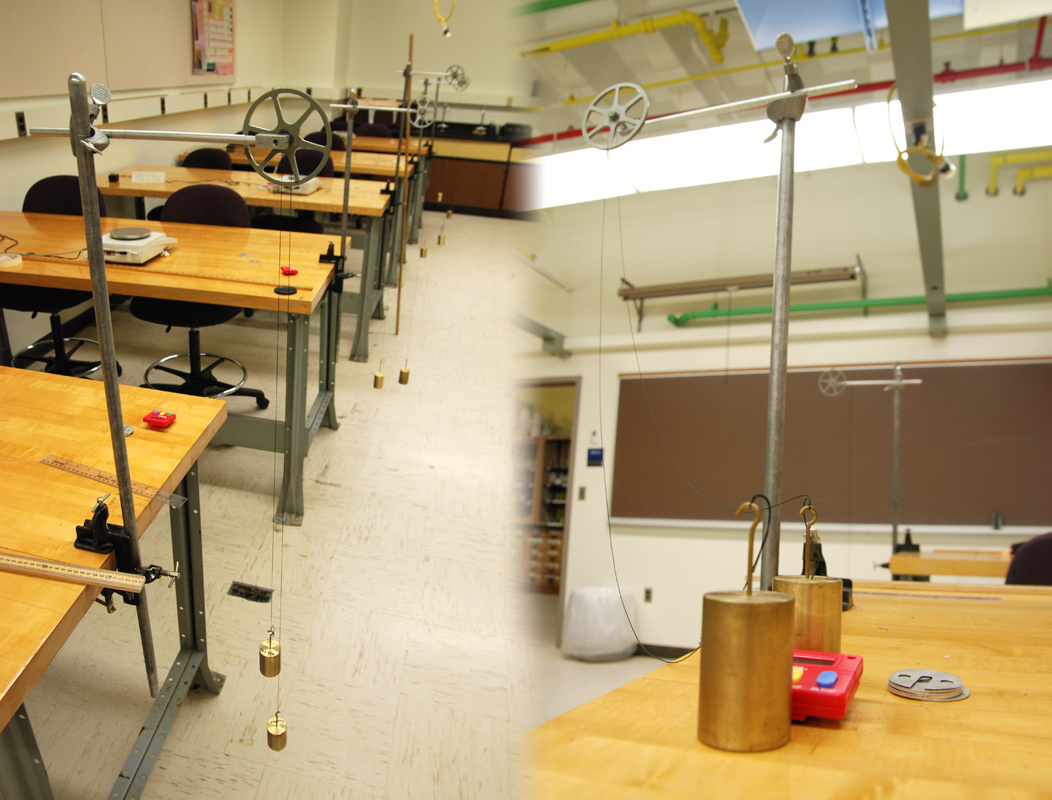 Each lab bench already has a lattice rod clamp attached to the rod.

Distribute exactly the compliment of masses necessary to each table. Use 500g on each side of the pulley, NOT the one-thousand asked for in the Loyd procedure. The 500g on one side must include at least one 5g mass and five 2g masses, while the 500g on the other side should be the hooked mass. Use tape and other small amounts of mass to make the two sides equal to within one-tenth of one gram. The procedure is modified for a first transfer of 5g followed by 5 transfers of 2g each. Facing the blackboard, the left side's pulleys should face closest to the blackboard, and the right side's pulleys should face the opposite direction. The pulleys should be oriented as straight up and down as you can make them for the best results. THE CENTER BOLT ON EACH PULLEY WHEEL MUST NOT BE MORE THAN FINGER TIGHT. Adjust the height of each pulley so one hanger can rest on the floor with the other hanger hook slightly below the pulley wheel and at least one meter above the floor. MAKE SURE TO NOT USE PULLEYS WITH THE RED * ON THEM. ALSO, MAKE SURE THE PULLEYS CAN SPIN FREELY WITHOUT STOPPING QUICKLY. USE GREASELESS LUBRICANT (SPARINGLY) IF NECESSARY. TAKE APART, CLEAN WITH ACETONE, AND LUBRICATE FOR POOR FUNCTIONING PULLEYS.