Forces and Motion in Coupled Systems

You are a volunteer in the city's children's summer program. One suggested activity is for the children to build and race model cars along a level surface. to ensure that each car has a fair start, your co-worker recommends a special launcher be built. The launcher uses a string attached to the car at one end and (after passing over a pulley) the other end of the string is tied to a mass hanging straight down. The car starts from rest and the mass is allowed to fall, launching the car along the track. After the mass hits the ground, the string no longer exerts a force on the car but the car continues moving along the track. You want to know how the launch speed of the car depends on the parameters of the system that you can adjust. That is, you want to develop, algebraic expression that can be used to calculate how the launch velocity of the car depends on ONLY the mass of the car, the mass of the hanging mass, the distance the hanging mass falls and the acceleration due to gravity. 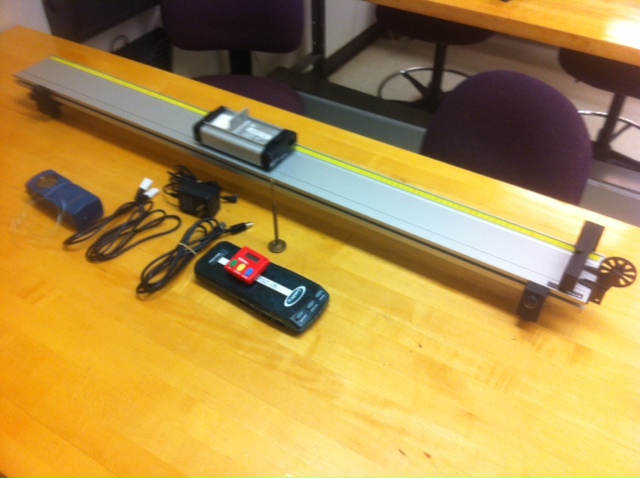 This is a two part lab. Leave the same setup out for the second part. When setting up the lab, leave the equipment on the table, but do not set up the lab besides putting the adjustable feet, end stop, and pulley on each track. Make sure each track is level by using the level in the topmost compartment of the red tool box. The string for the pulleys can be any kind. Black nylon or mono-filament string are preferred. If the small silver adjustable end stops are already mounted on the tracks, take them off and use the dynamic track end stops instead.