A pulley connected to a photogate on a lattice rod. One weight hanger on each end of a string over a pulley, with a total of 300g on one side and 302g on the other side. 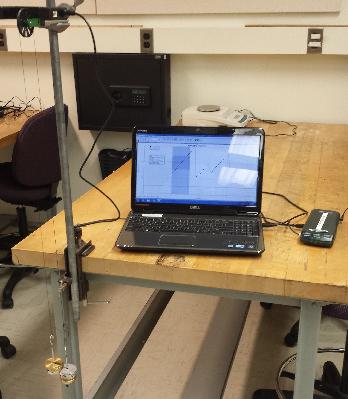 The silver hangers with the thinner center rod must be used, as well as the slotted masses with the smallest diameter. This will prevent the masses from colliding with each other, as the pulley diameter is relatively small. Place one mass hanger on each end of the string over the pulley, with a total of 300g on one side and 302g on the other side. The 300g side of the pulley MUST have at least five 2g slotted masses; the remaining mass on each side can be divided into any denominations. Despite having a slot for the normal dig/sonic Labpro cords, the photogates are not compatible with these cords and cannot transmit data with them. As such, ensure that the cords with the phone jack style plug on one end are used.

Instructor is responsible for taking out and setting up laptops.

If the lab setup list only says Newton s Second Law, check with supervisor whether this should be the old Atwood setup, the computer-based Atwood setup, or the carts and track setup.

Along with the initial apparatus set-up, supply a sufficient number of the appropriate paper procedure handouts for all of the lab sections that will use the set-up over the course of the week. Print the PDF, duplicate to double-sided pages, staple, and leave pile on instructor's table prior to first use of set-up.