This lab focuses on the motion of a spring mass system in which a hanging mass is displaced and released, and the effects of three forces (gravity, restoring force, and friction) are assesed. A mass bouncing up and down on a hanging spring is an important example of a variable net force acting on an object. This experiment deals with the “free” vibrations of such a system, that is, the motion the mass undergoes when it is simply displaced from its 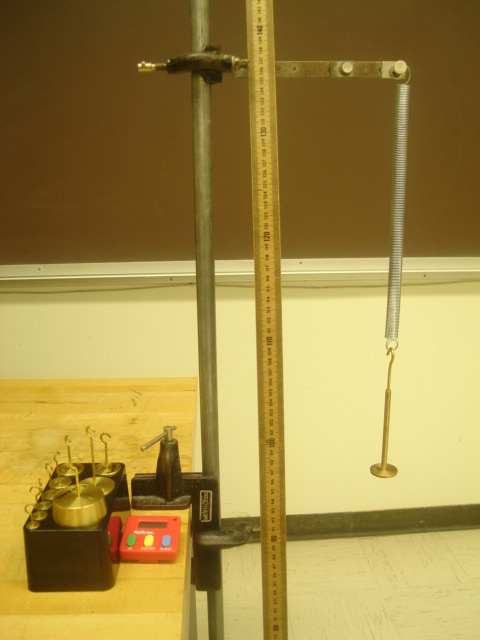 Place enough slotted masses on each table so that students can add 250g or 1150g to the 50g hanger for a total of 300 or 1200g. The pendulum clamps have a piece of metal between the extended arm and the screw. It is important that the spring is secured between the extended arm and the piece of metal, NOT just placed on the screw. Make sure that the springs that are chosen have not stretched out too much. Two meter or 1.75 meter long sticks work equally well. For classes using the Computer Based Data Collection (CBDC) variant of this lab, put out the labpro, motion detector, and associated cables in place of the 2-meter stick and timer. The motion detector should be on the ground underneath and facing the mass. Regarding CBDC option, ask supervisor/instructor and see Lab PDF 2.

Along with the initial apparatus set-up, supply a sufficient number of the appropriate paper procedure handouts for all of the lab sections that will use the set-up over the course of the week. Print the PDF, duplicate to double-sided pages, staple, and leave pile on instructor's table prior to first use of set-up.